We remember when we worked in an office, when there was such thing as a weekend, a Friday night and a Sunday morning; we remember when people started asking you after Easter what your plans for the summer were and desperately wondering what the hell we were going to be doing. The thought of sitting in an office (no matter how efficient the air conditioning) for months on end was not super appealing.

St Ives for the summer

So – honestly – our thoughts would turn to long haul flights and sub-tropical temperatures; in our head we were already buying a fortnight’s supply of Deet and checking our vaccination record. However it needn’t have been that complicated as we found out in the Summer of 2010 when we walked the SW Coast Path through St Ives.

Having never really been to Cornwall before we were struck by golden sand, sparkly green/blue ocean and the fact you could eat a Cornish pasty, triple cooked chips, salt & pepper squid, salted caramel ice cream and a cream tea without ever leaving your deckchair.

A half hour journey on the top deck of an open topped bus left us with a huge hankering to see more of this place where stunning countryside meets the Atlantic Ocean. 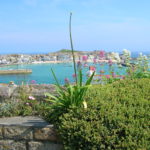 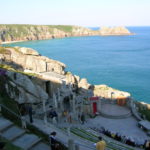 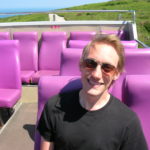 OK, so it’s a bit cheesy but we kind of fell a little bit in love with Cornwall that day and summer didn’t feel that far away from London and our respective offices. So much so that later on that week we were planning a repeat visit – you’d have to have some serious money and flexibility to consider that from the long haul destinations we’d been fantasising about earlier that year.

We set out to treat our holiday in Cornwall the way we would have treated a trip to Vietnam et al; instead of lounging around reading and eating cream teas we hit the Cornish hot spots. The Minack (pic above – 3rd one from the left) and St Michael’s Mount took our breath away, Sennen Cove (even on a cloudy day) made us feel like anything was possible and parts of the coast path didn’t even look like they belonged in the UK. 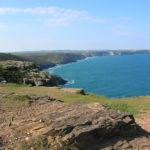 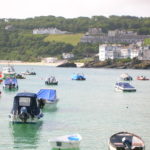 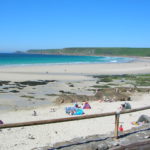 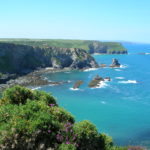 We did not go hungry! Mussels from Fowey (pronounced Foy), crab from Newlyn and more Cornish pasties than you could imagine two people were able to consume. We ate fish & chips on the beach and hid our Moomaid ice cream from the seagulls. There’s a reason Cornwall is fast becoming the foodie capital of the UK and a recent Expedia survey rated it as the 3rd food destination in the world, just behind Puglia and Madrid. We didn’t visit the Rick Stein’s or Nathan Outlaw’s of the county as we were on a budget but we didn’t feel remotely deprived.

We walked – A LOT! Although we didn’t quite make it into the ocean that holiday we did when we went back, we attempted to surf, body board, we went on fishing trips, hired bikes, visited the art galleries, sunbathed (not sure that counts as an activity) and set off in kayaks. We didn’t kite surf, windsurf, sail or play golf but we’ve done a fair few of those things since.

Summer lasted a long time that year… A 5 hour drive or 5.5 hours by train from London, Cornwall became manageable for a weekend, a much needed oasis that we could revisit whenever we wanted. We even came down once on the overnight train for just one night… granted that was more necessity than choice but it was doable nonetheless.

Since that summer we’ve flown from Exeter Airport to City and Newquay Airport to London Gatwick and it’s just as easy to do that from Manchester, Edinburgh, etc.

It isn’t about ‘keeping it local’ or the very on-trend ‘staycation’, it’s actually just about going to a fab place which doesn’t cost the earth or involve you trekking through airport security. It has stunning beaches, superb scenery and a beach BBQ / cafe culture. You couldn’t ask much more of your summer and we love it down here so much we want to show you what you shouldn’t be missing.

Visit our Your Stay page for info and if you’re in any doubt about what you might get up to when you’re down here visit What to Do; which doesn’t even cover drinking a cold beer with the sand in your toes.

Posted in St Ives / No Comments